Two things coincided this week. The imminent launch of our new UK Lakes Portal illuminated how few lakes we have recorded names for, whilst a visiting work experience student was needing something to do…

It turned out to be over 33,000 lakes without names, more than 85% of the UK total. Now we know that plenty of these have names: some known only to locals, some well-known regionally, some literally on the map. It’s those latter ones I aim to catch with this system, and working together, I think we could gather a decent chunk of them. [it would be very unfair of me to expect one student to find the names of 33,073 lakes, so I’m opening it up to the world..] 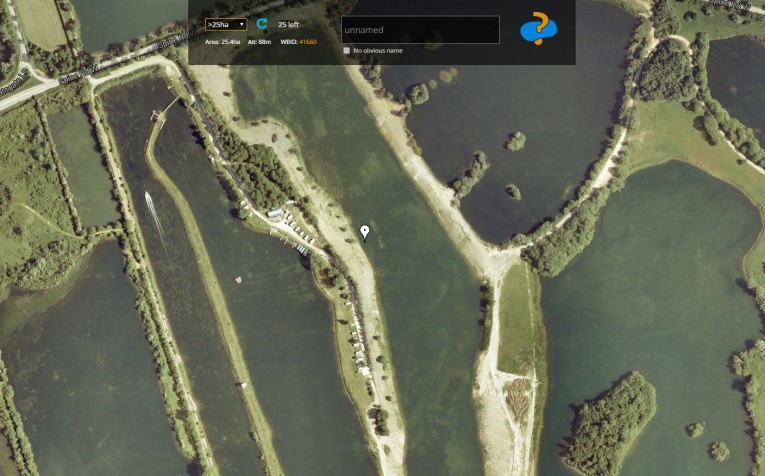 Lots of lakes, not many names…

Clicking the pink OS link will give show a 1900s map vs a modern OS map for more clues.

————————————————————-
By contributing to this project, you will be helping to improve a public service – a data portal representing every lake in the UK. This website and the Name-That-Lake! site are operating as my own free-time projects, as I’m the custodian of the dataset and I’d love to see it get even better. By helping me, you’re helping improve our knowledge of lakes in the UK. Just not officially (I’m not paying you, OK?!).
All names will be reviewed before being accepted for use in the national portal. Funny, rude +/or made-up names will not make their way past my eagle eyes. If you want to get away with something, do it in Welsh, Cornish or Gaelic – I can’t profess to fleuncy here. But I didn’t tell you that. Be good. Please.

I’d not played with the Google Maps API for a year or two until this project, so it was interesting to see some new features. One that grabbed my attention and proved a useful addition to this project, was the ability to style the various map features at your own behest, even adding a style set to the map control options.

After some initial feedback for Name-That-Lake, it became clear people were finding likely errors in the database, where a water body was listed as existing at that location, but the satellite imagery disagreed. Or at least it appeared that way – wooded cover causing the biggest headache when identifying small waterbodies.

The custom map layer makes it pretty clear where water is.. (and spirals!)

Using a custom map style, we could make it abundantly clear where google maps thinks water lies. Using that linked example, it’s just a few steps to a simple black/white water layer. Get rid of the hue settings (they only apply to colour) and set the color of the map to white. Then remove labels and set water to black and we’ve got ourselves a high-contrast water layer:

And that’s it, a useful addition to the project that took about 30 minutes to implement. Will it lead to an avalanche of excellent data coming my way? We’ll see…

2 thoughts on “Name That Lake!”