There used to be so much more distilling happening in Edinburgh. Aside from the big North British grain distillery and a couple of ‘craft’ upstarts potentially about to appear, almost all of that heritage has gone – consigned to the ‘lost distilleries’ bin. Having said that, whisky 100 years ago was not the same thing it is now – you’d have been hard pushed to find a single malt from one of Edinburgh’s many distilleries.

After hosting a walking tour around the current and past distilleries of Edinburgh, it inspired me to go searching for more evidence. There are some excellent online resources, with the National Library for Scotland providing a comprehensive history of town plans (of particular use, the very detailed 1849 and 1893 plans).

There are also resources from individuals, like the excellent Lost Distilleries of Scotland, but even combined with maps, there are always a few tantalising details missing. That’s until I found about Post Office Directories. I was introduced to these by way of a friend’s Uncle, who happened to have a nice original set to look through. Some of the larger volumes contain listed addresses by profession / company name – perfect for looking up active distilleries and their addresses! Could this be the missing link? 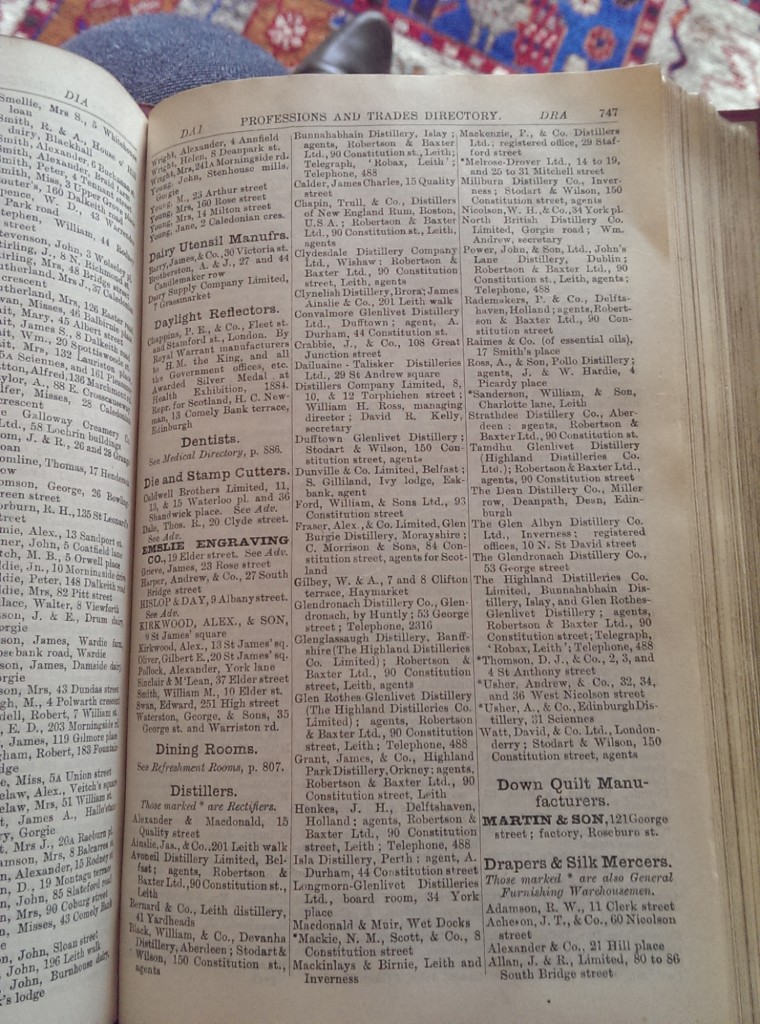 The listed distillery companies from the 1906-15 Edinburgh PO Directory

Let’s just take one example for now, that of this distillery in Sciennes. The information listed on the Lost Distilleries website is excellent, all except the location of ‘Sciennes, Edinburgh’. Now Sciennes is both a region of Edinburgh and the name of a street, so this gets even more confusing. The pictures purporting to show the remaining distillery buildings are at the intersection of Sciennes and Sciennes Road, and to be honest, don’t look likely candidates to have held a distillery.. (perhaps its offices?).

So, let’s dig deeper in that directory. We’re looking for a listing for any of the names (West Sciennes, Newington, Glen Sciennes, Edinburgh), but no joy. Scrolling through every record though, we do find at the end a listing for ‘Usher, A., & Co., Edinburgh Distillery, 31 Sciennes’. Bingo! Now we have an address and a confirmation of the name at this time.

Now we can explore the old plans to see if it was recorded around its inception as West Sciennes Distillery in 1849. According to the Lost Distilleries website, it changed its name in 1851 to Newington Distillery, so a plan of Edinburgh in 1849 should just catch this first name. And joy! The distillery is indeed shown and named on the 1849 town plan… but it’s already called Newington Distillery: 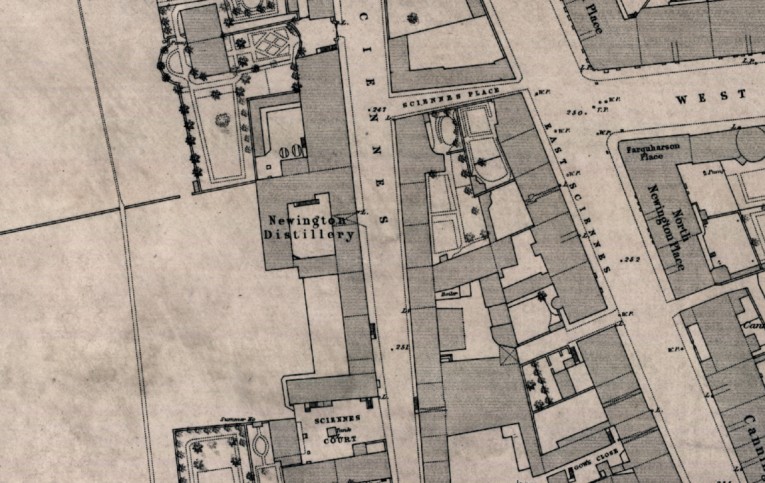 It was supposed to be called ‘West Sciennes’ at this point, or maybe even not exist yet. Doubting the town plan to be wrong, and unlikely that the surveyors were predicting the future, I think we’ve found some improved factual information. As this is listed under A. (Andrew) Usher & Co, it’s reasonable to presume this distillery’s identity was never really important in any way (hence the name changes). However, you may have noticed the asterisk next to this entry in the directory – a quick look to the start of the listing and you see this is to identify ‘rectifiers’. But what IS a rectifier? I didn’t know, so over to you free dictionary… 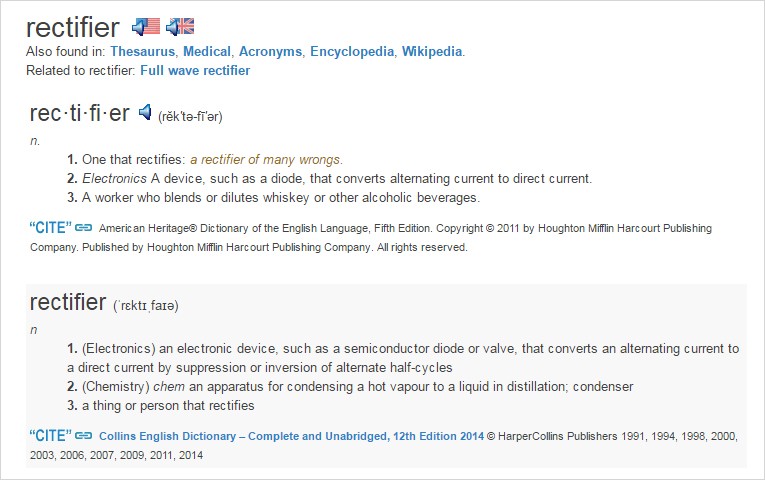 A-ha! So using definition 2 from the lower source, we can see it was a previous name given to a condenser. It seems plausible the person working with this condensed spirit has taken on this name to refer to those who blend whisky (see definition 3 in the first source). So it seems Andrew Usher was using the spirit from Newington Distillery for his soon-to-be world famous blended whiskies. And lo and behold, there’s even a stained glass window proffering his wares in my local pub:

The final part of our investigation is to look at what’s there now.. It seems the distillery was indeed demolished in the 1980s, and replaced with brick flats. I’ve been in one of these flats before, perhaps I was on more spirited turf than I realised? You can have a look on street view, but there’s nothing there – the buildings on the lost distilleries website are at the end of the road (on the left) – you can decide for yourself if they look whisky-related. I’ve looked through every town plan from the NLS online collection and there is never any mention of those building being related to the distillery, but the renaming to ‘Edinburgh Distillery’ seems to check out.

So now we’ve learned some new information about the location of this distillery, its owners, their rectifying – and not only that, we’re also improving the information on its naming timeline. I suspect more digging through those town plans and PO directories will bring more facts to light, but for now, that’s our history lesson for the day. (Oh, and just before I go – to bring this story full circle, Andrew Usher was one of the co-founders of Edinburgh’s only remaining distillery, North British.)