During a visit to Kilchoman Distillery in late October 2015, we got to see some of the hidden-away parts of proceedings, including a great chat with Russell the (Zimbabwean) Stillman – with a farewell taste of the spirit straight from the spirit safe (“is it toxic? Ah no, should be ok now – it is 75% abv though!”).

So. let’s go and take a look at some of the lesser-seen sights at a small distillery…

First up, here’s a video I recorded in the bottling room. It’s a bit noisy, but a pretty cool thing to see. Not many distilleries do this on site.. [take a guided tour from 0:11, and see what you can hear above the noise!]

Let’s start with a glimpse of the production process. This is a view into the holding tank – it’s a kind of a make-weight between the still and the 4 (metal, suitable for a farm) washbacks: 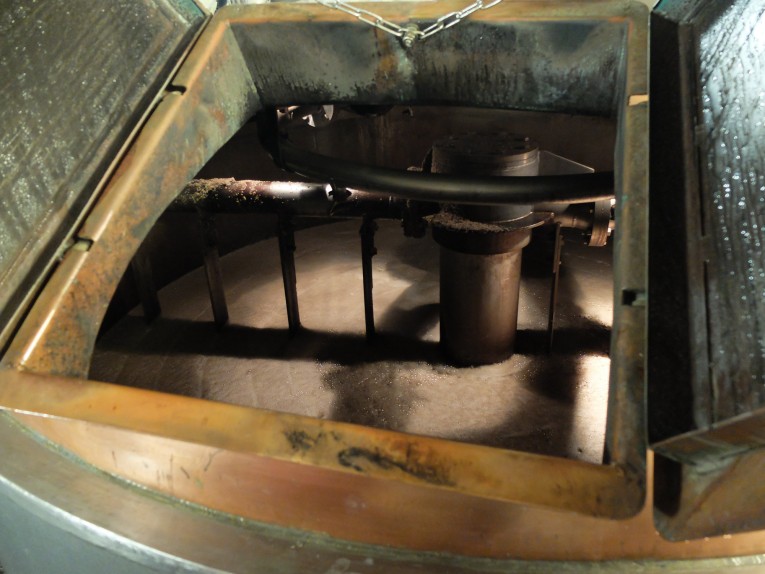 This was a holding tank before the metal washbacks were filled. 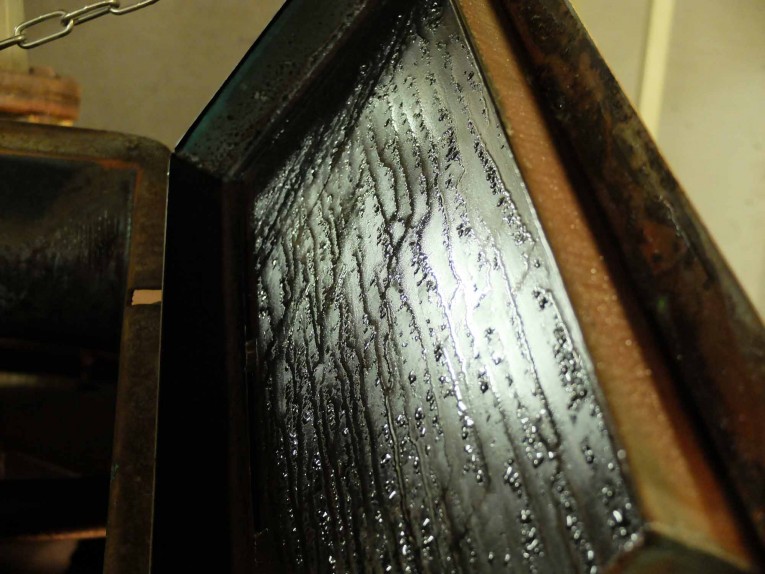 Condensation on the holding tank window. 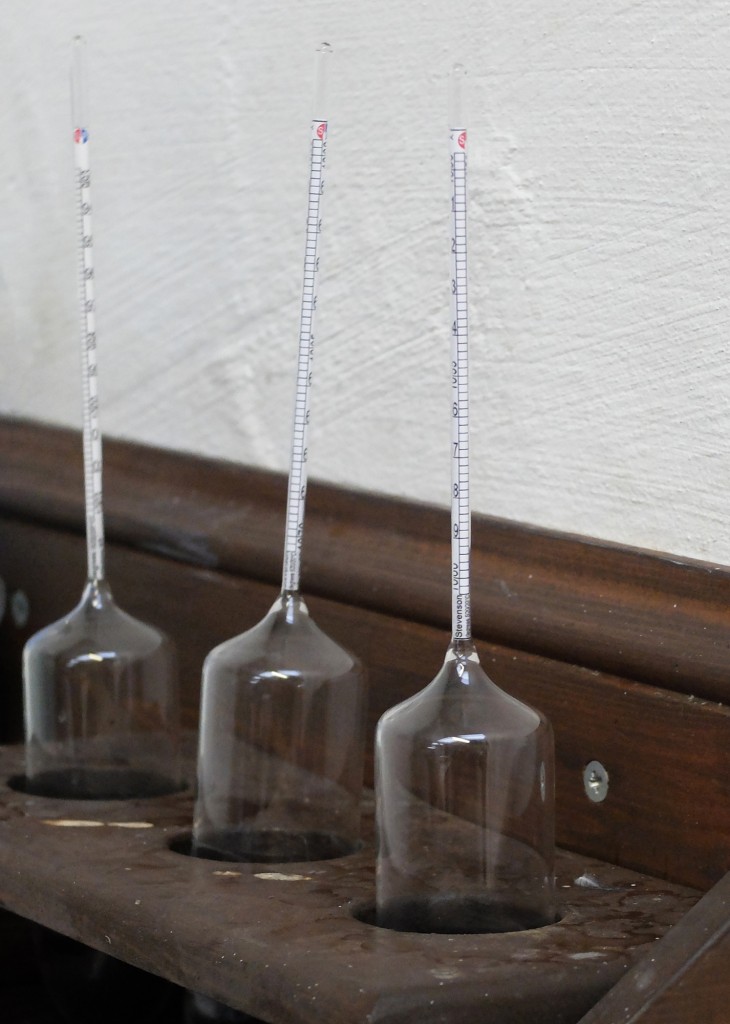 These are Saccharometers – used to measure sugar levels.

Those Saccharometers were very interesting. We’d seen them in use the day before at Ardbeg. They measure sugar levels in the wort as its fermenting in the washbacks (essentially, wort is a malt barley beer) and are used to check fermentation levels / consistency between batches. It’s nice to see such seemingly old-fashioned equipment still playing a fundamental part in the process. 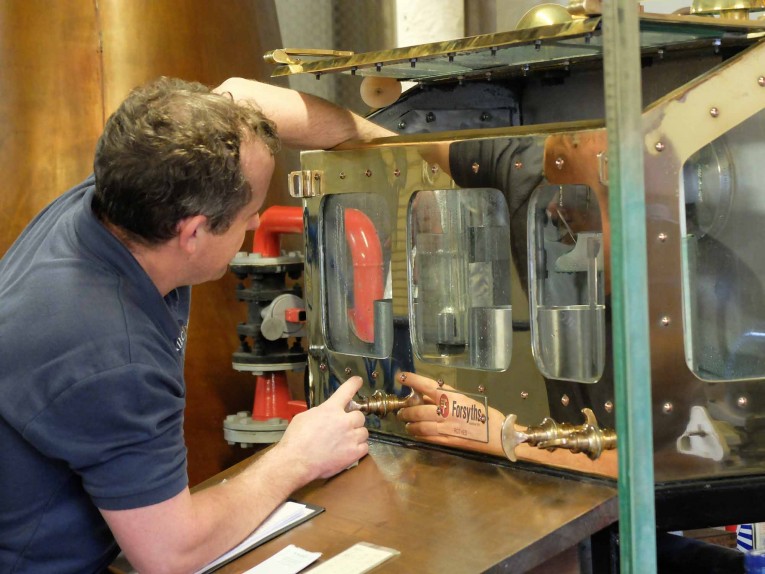 During a distillery tour, you rarely see this kind of hands-on action – wasn’t for the benefit of the tour, either. 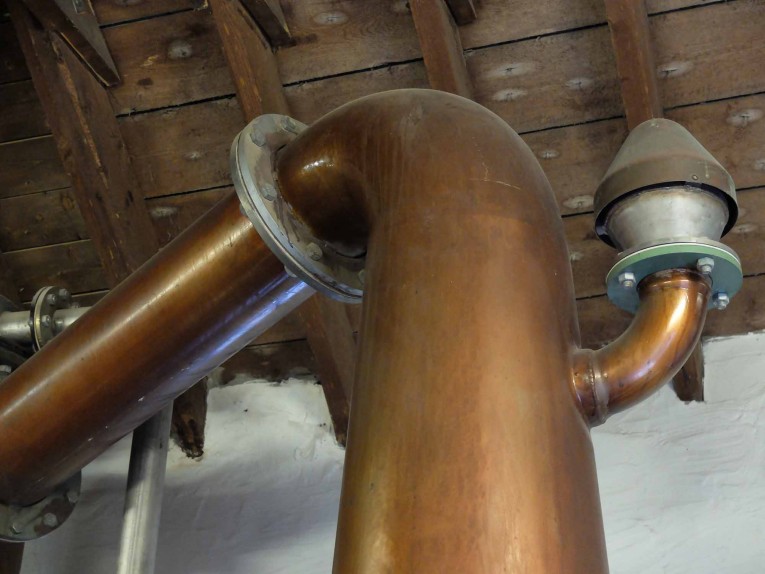 I’m not entirely sure what this ‘chimney’ does, but I thought it looked kinda cool – like a kid’s train toy.

Whilst we’re having a wee look at the stills, it was exciting to see the still was not only working, but had a little viewing window that actually had some action inside. After some questions later, I determined the still is under no pressure whatsoever (in fact, the bigger worry is implosion) – you can see the alcohol evaporating up in this short gif, ready to be extracted:

Now we’re moving across the to another farm building (maybe 5m away – it’s a tiny site!), where the packing, bottling etc takes place. I found this part just as interesting, as it’s a rare sight to see on a distillery tour, but much appreciated. And, by the way, photos were allowed throughout the whole distillery – a rarer and rarer thing, these days.. 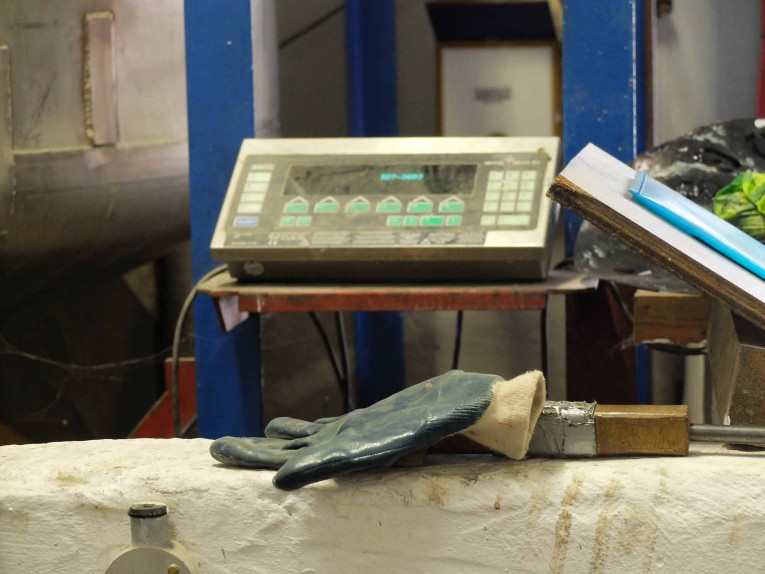 The distillery site is a nice mix of working farm and distillery – at times, it’s not obvious which is which. 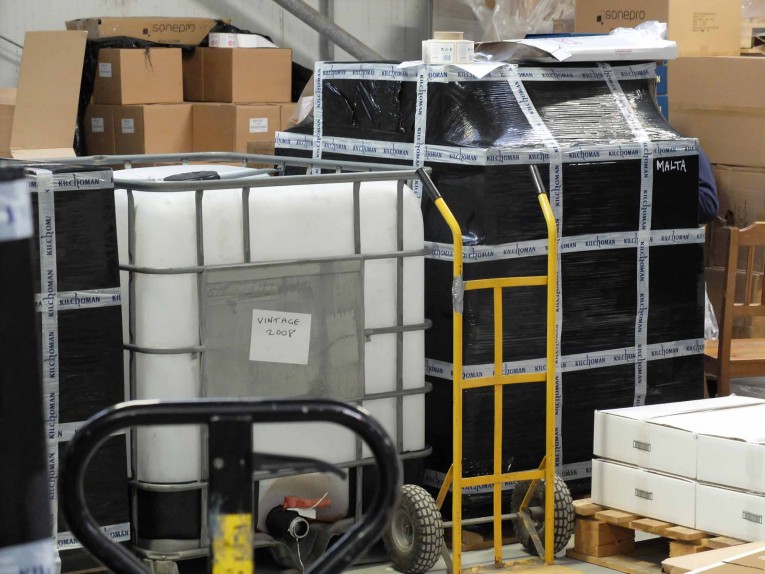 A big vat of the 2008 Vintage sits next to a crate bound for Malta. 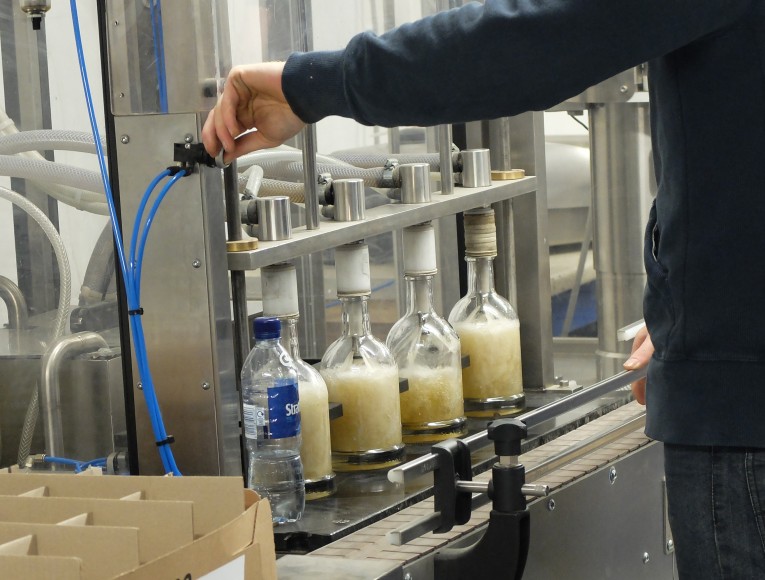 Boom, there goes the dynamite! 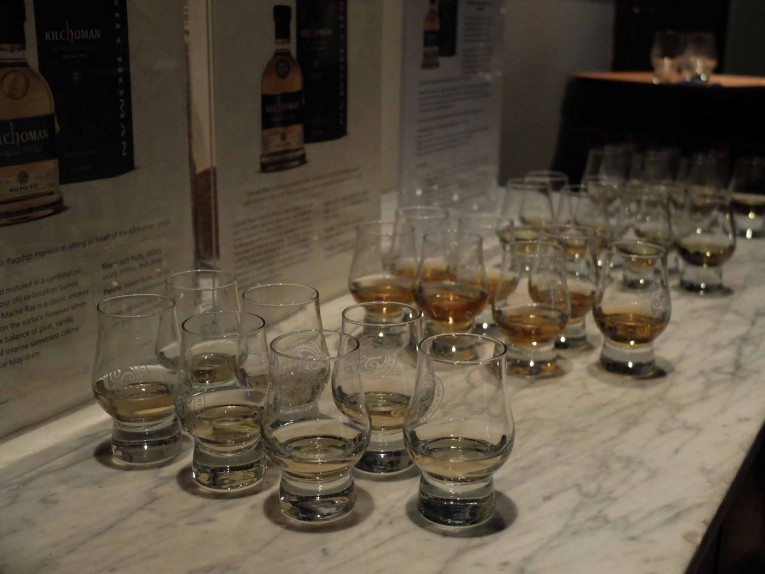 A nice lineup after our tour – 5 drams to try. 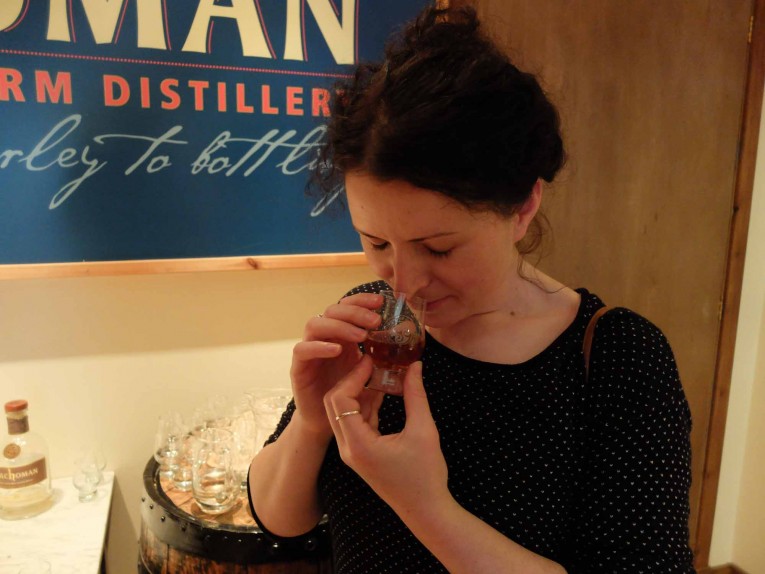 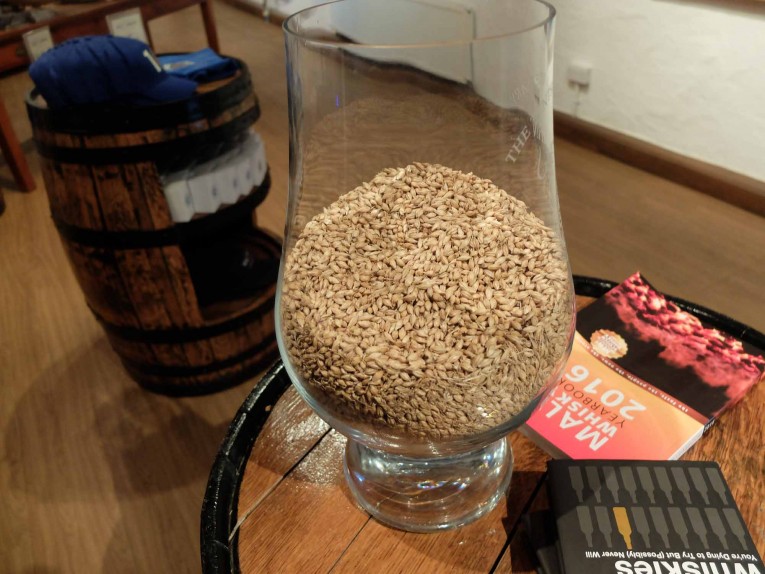 That’s one big glass of barley – unless I was briefly channelling The Borrowers..? 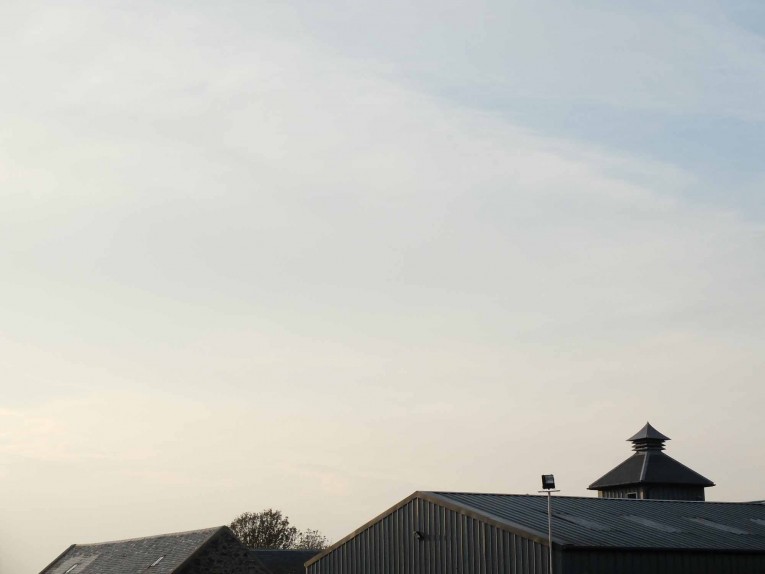 A beautiful Islay sky to send us on our way..

I couldn’t recommend a trip to Kilchoman Distillery enough. It was a really informative tour, and had a very uncorporate air about the place – we were welcomed into the stillhouse after our tour when we popped our heads in, and everyone on site seemed committed to making an authentic, farmy dram. Plus, you know, their whisky is great.