I’d like to imagine that the best way to learn how to blend whisky is through practice, because that’s going to be a fun journey of discovery. Practice and evaluation, perhaps. I guess we all learn from our mistakes.

So, that’s what we did. For our 5th Birthday celebrations, the Southside Whisky Club upped sticks to a fire-lit cottage in the Highlands armed with a whole heap of whiskies, 10 bottles to fill and little knowledge or experience to guide us.

I decided to treat the whole thing as a big science experiment, so I hereby present my report: 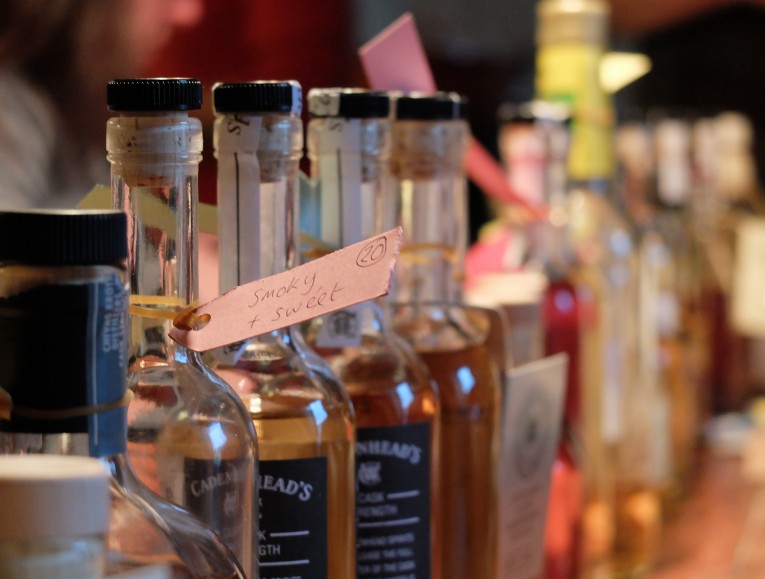 The long line of whiskies, all with rough tasting profiles..

And we actually learned a lot. So take a journey with us and enjoy the fun, without having to endure a headache in the morning:

It was Southside Whisky Club’s 5th Birthday and we wanted to celebrate with something a bit different. We hit on the idea of getting a big load of whisky together and sitting down to each make our own blends: concept, label, branding an all. We hoped this would not only be fun and help us to explore the qualities of the different whiskies, but would also illuminate something deep and fundamental about the spirit of the, err, spirit.

Each person had their own strategy. Some brought pre-printed bottle labels and a well-defined plan for the contents. Others went for the ‘wing it’ approach on both counts, and most were somewhere in the middle. Some had a strict system to work under, others had full flexibility. Considering the infinite range of possible combinations, it was interesting to see how different people dealt with this, with two early strategies emerging: ‘set out some rules and see what works within them’ vs ‘mix and taste / trial and error’. Virtually everyone had a flavour strategy though, with at least some idea of what they wanted the final outcome to taste like. 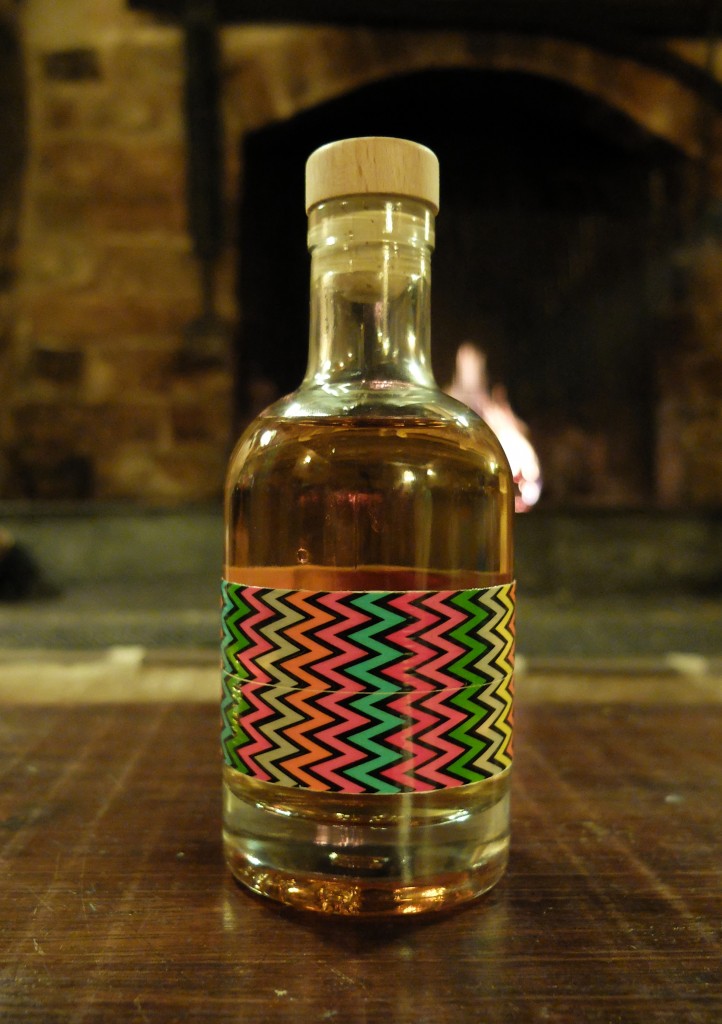 Giles was the speed-demon of the group. He knew was he wanted (“a balance of lightly peaty, heavily sherried and sweet”) and he dove straight in. He added a bit of grain and used a total of 6 whiskies, keeping the average age pretty low. He also made a number of impressive ‘side blends’, including a salty sensation. 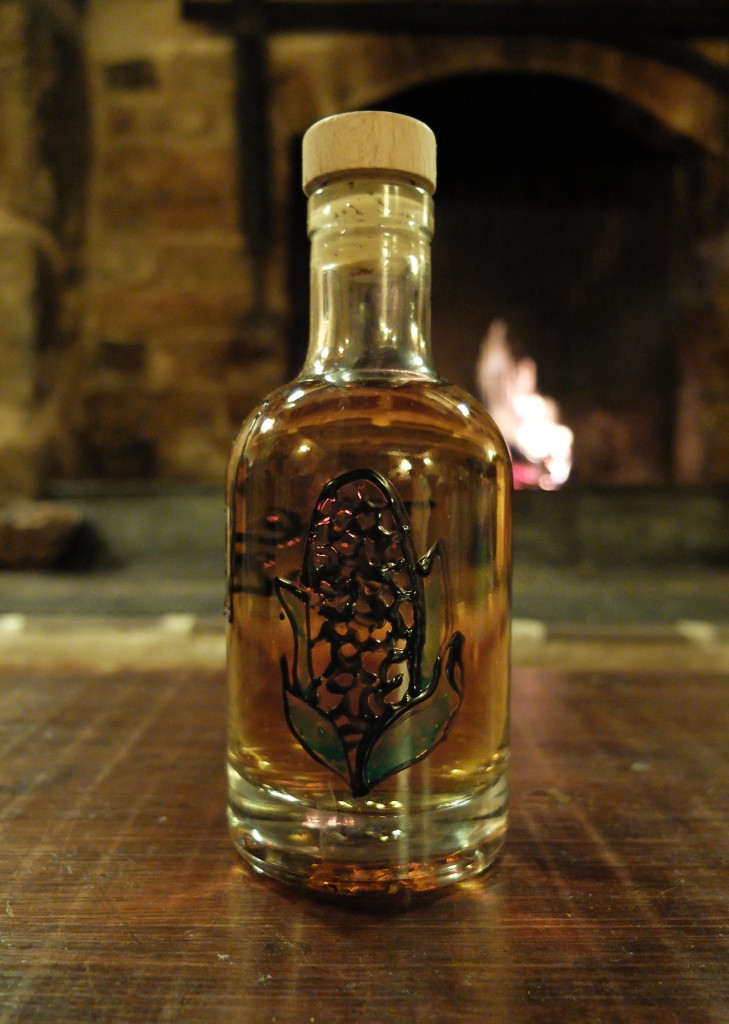 Russell’s offering was pretty youthful and decent value, which wasn’t disconnected from his aim of making “a corny, smoky, sherry dream”. The only person (mad enough) to use Mellow Corn as a base, he ended up with 7 whiskies in total. 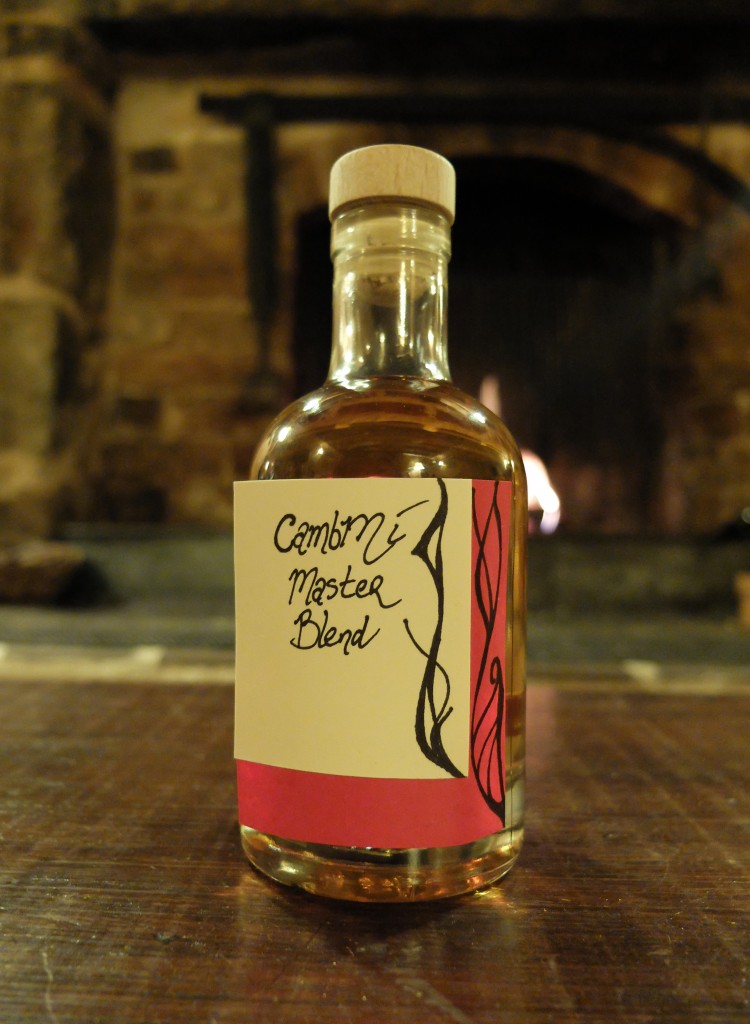 Liz had a simple aim: “peat and sweetness” and perhaps something that was reminiscent of the location after being inspired by the cottage in her blend’s name. She tinkered, 10 whiskies in all and included some grain in the mix. 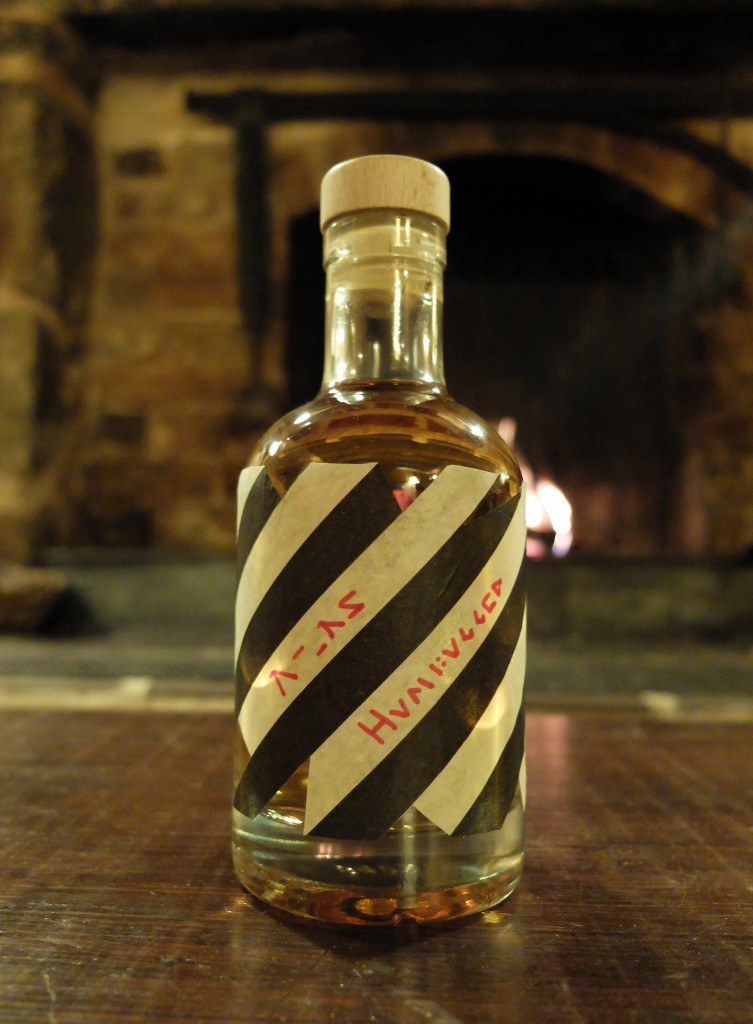 Jamie developed the high-brow gameplan of creating something “describing the harsh reality of a market-driven society” and ended up with 5 whiskies in total. His initial gameplan was “argggh, where do I start?”, so it’s impressive to see he ended up with something highlighting the world’s wrongs. Included some grain. 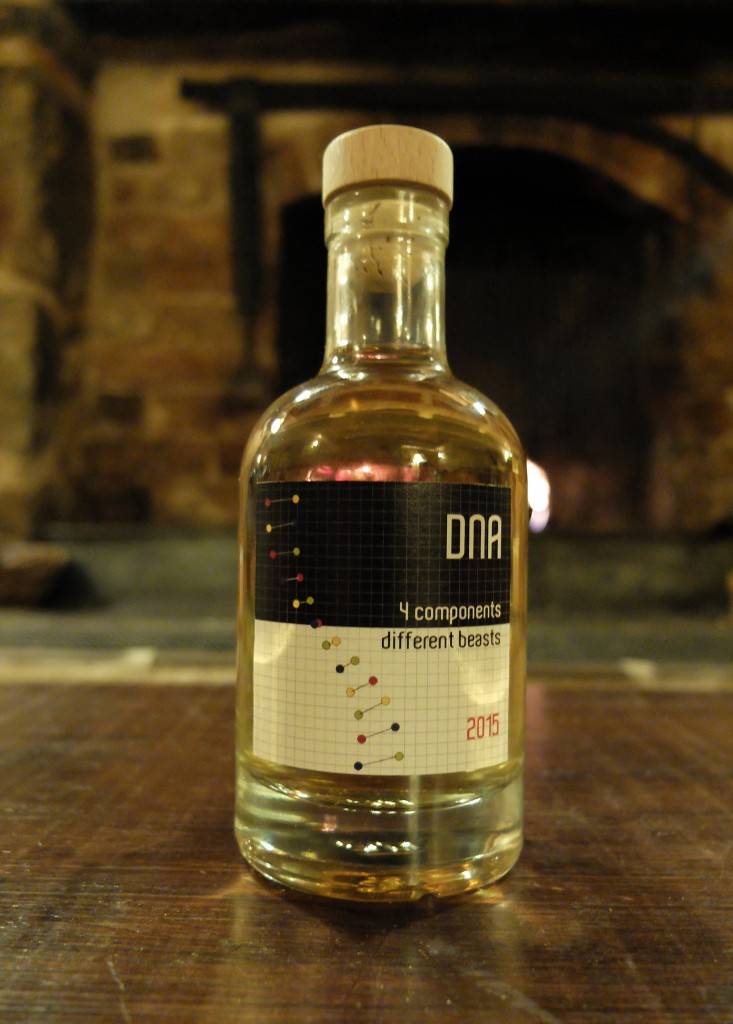 Phil branded himself into a strict concept: 4 components, in the ratio of nucleotides in DNA (2×36%, 2×14%). He also aimed for an age statement so limited his choice to 22 whiskies, and added grain to the mix. His general plan was to make something ‘fruity and clean’, without a sherry influence. His was the most expensive of all. 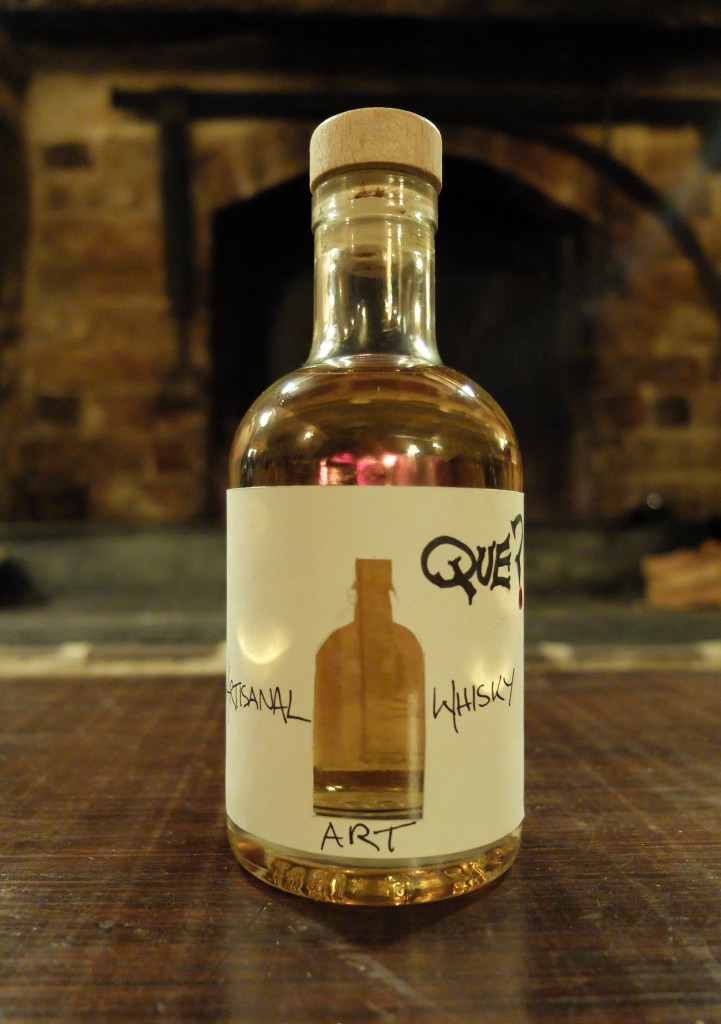 Hamish’s had the oldest age statement and was not surprisingly also one of the most expensive. His plan was for something “really sweet, with a bit of citrus”, and he only used 4 components, using a hefty (40%) grain base, making is the graniest of them all. 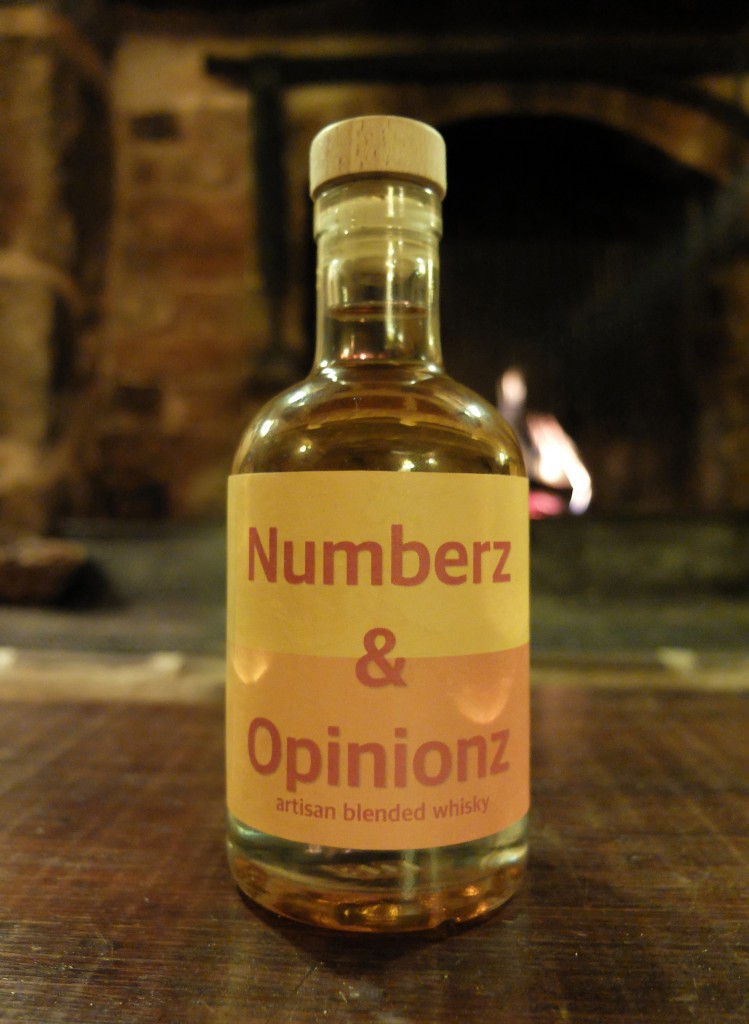 Ali was the only one to bring a fully-fledged video advert to accompany his blend, and won many fans because of it. Inside the bottle, he went for a combination of 5 whiskies, and kept it young. He was one of only three to only put malts into the mix, aiming for something with a “broad spectrum of fruit”. 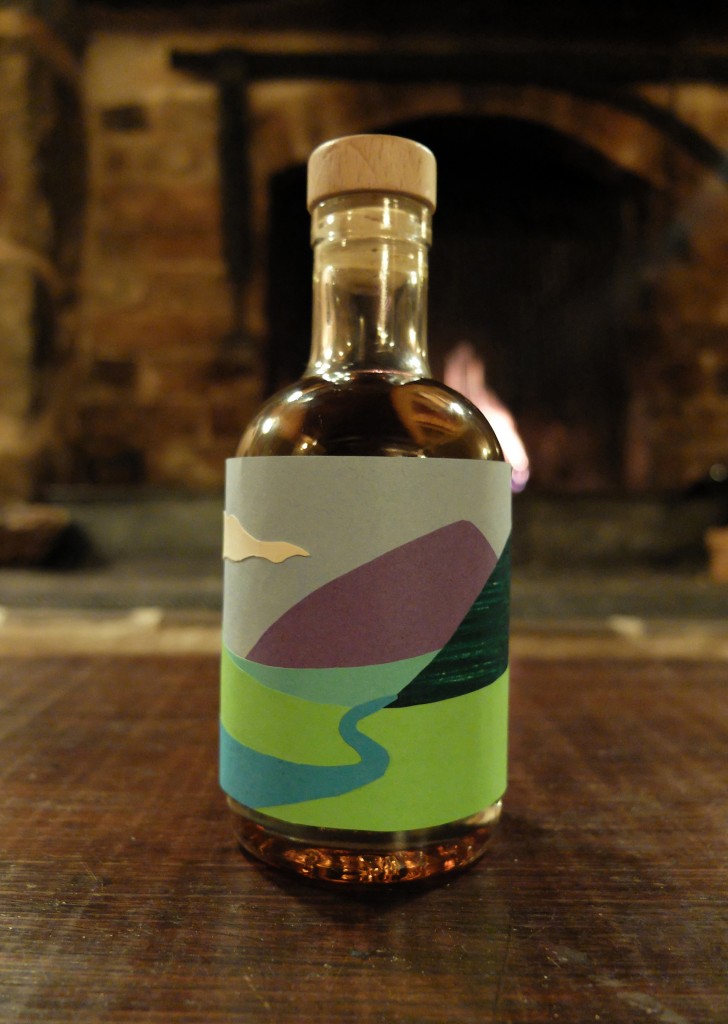 Lucy named her whisky after a local valley, inspired by the day’s walking. She was aiming for something “sweet, with a wee bit of peat” and used 5 whiskies in total. This included a grain – the only person to use the Cameronbridge. 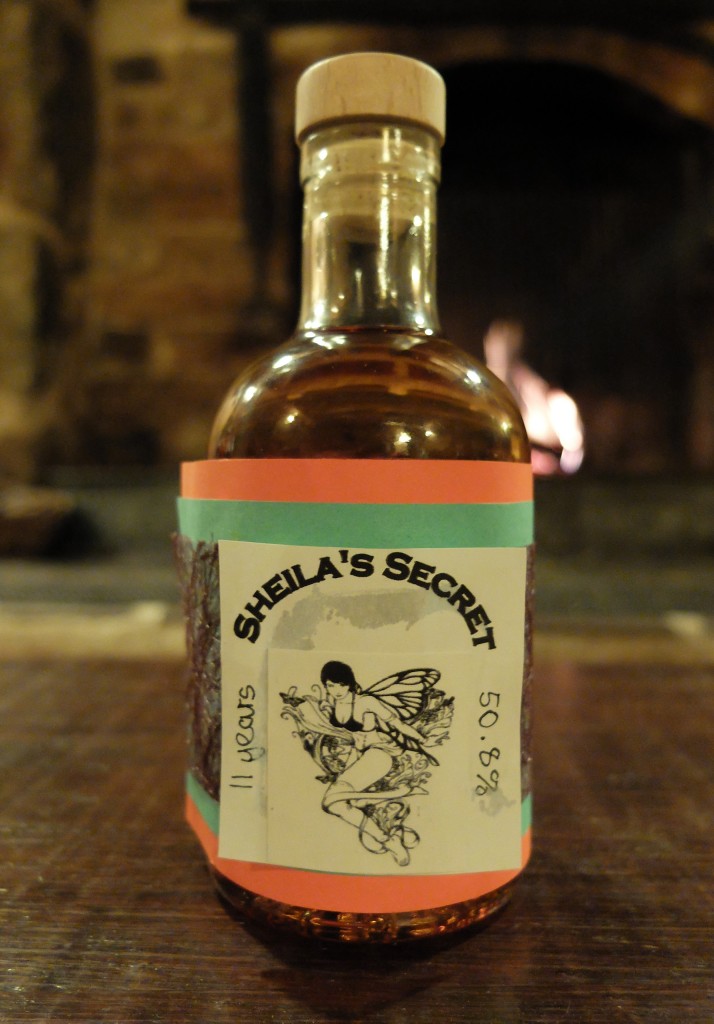 Shelley used the most whiskies in her blend, amassing an impressive 11 in the process. Interestingly, none of these were grain whiskies, making her one of only two to make a blended malt. Her approach was to make something “maritime, with mainly island whiskies”. 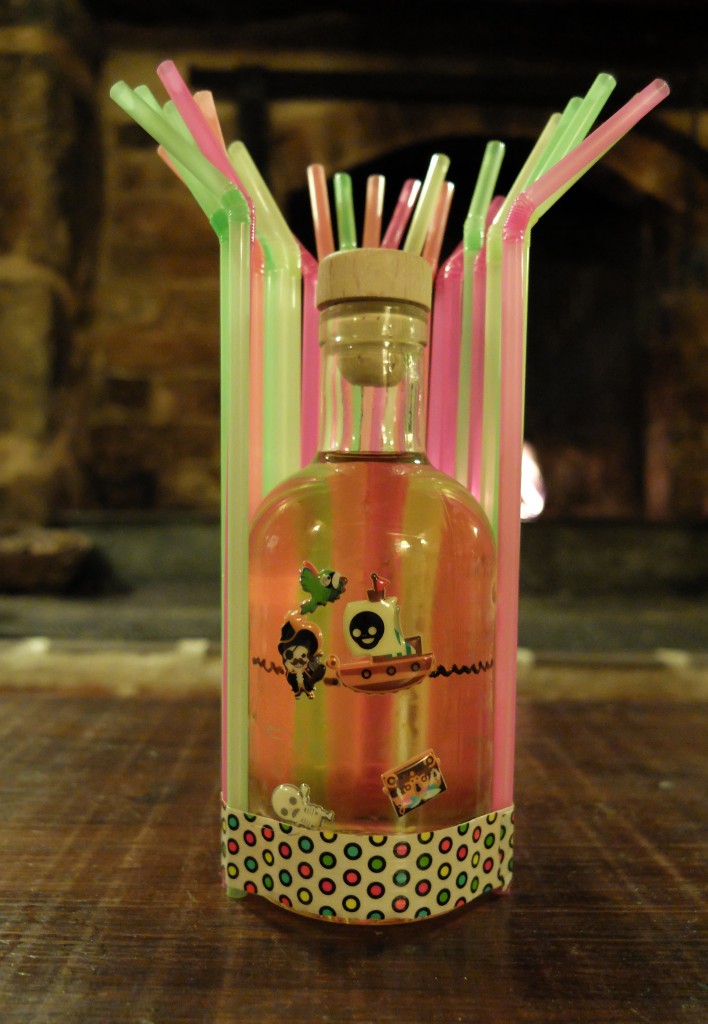 Iain seemed intent on setting records: he ended up with the youngest average age, which helped him also create the cheapest blend of the night. He had a specific flavour-plan – “Caribbean, rummy, fruity & coconutty”. He was also the only person to go for a double-grain mix, albeit in small quanitities (5% each). 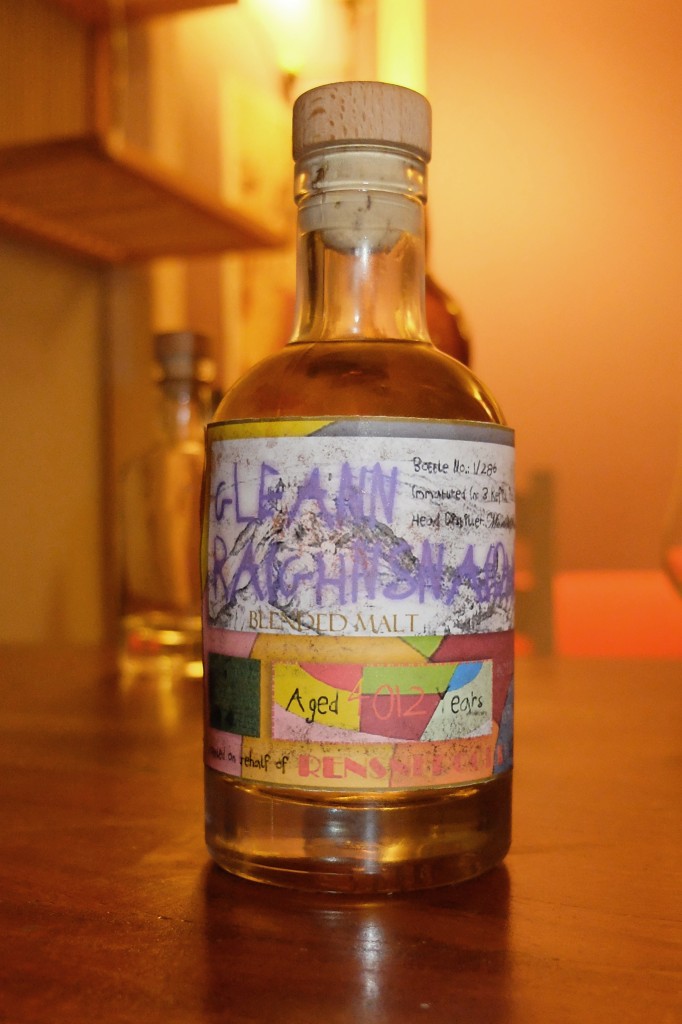 Martin missed the Birthday celebrations but got involved two weeks later, making his blend by way of eliminating the undesirables. He then aimed to create something with a Springbank / Caol Ila vibe, with a distinct sherry base to it. He forewent the grain, not wanting that corny flavour involved – becoming the 3rd member of the ‘Blended Malt Club’ in the process.

To most, the blending process was an illuminating one. I think it’s fair to say the following truths existed before we got started:

This was a comment we heard a lot. To be honest, we sourced some pretty great whiskies to blend from, and most people weren’t trying to offset a weak whisky with a good one. Almost everyone was aiming for a certain finished product, although the definition of that product changed slightly as the process developed.

That last point has an analogy with mixing paint: even a small amount of black paint is hard to mask with other colours. Big, bold flavours (sherried Longrow, Cradle Mountain red wine cask) were still quite obvious in finished blends. Perhaps for this reason, no one attempted to blend the SMWS Ardmore, which had a very strong, hammy sherry influence.

I also asked people for their specific experiences:

All the blends were very pleasant and drinkable but if I were to be honest some of those drams standing alone were pretty damn awesome and were simplified / lost in the blending process..

Very relieved that they tasted good and we didn’t just destroy all those amazing whiskies.